PHOENIX (March 10, 2022) – Being honored with the Phyllis Ehlinger Women of Excellence Award is a rare opportunity—a distinction reserved for an elect group of businesswomen who embody qualities of the highest caliber. 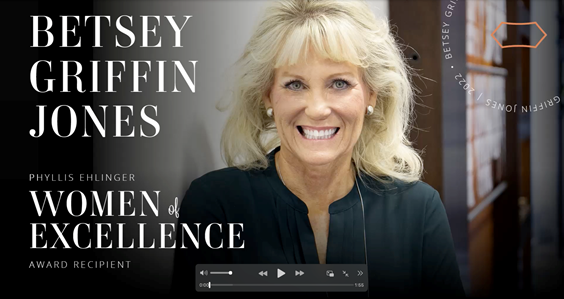 That said, it was no surprise to her peers when Betsey Griffin Jones, media director for LAVIDGE, accepted this year’s award on March 10 during the Phoenix Ad Club’s 2022 “ADDY” American Advertising Awards ceremony at the Orpheum Theater.

The annual ADDYs event feeds top winners to the regional level, which qualifies them to compete in the national American Advertising Federation’s annual competition.

Griffin Jones, one year away from completing 40 years of experience in media buying and sales, easily exceeded the minimum 15-year criterion to qualify for the award. Twenty-five of those years have been in Phoenix—including 18 of them at LAVIDGE—where she has successfully led the Phoenix-based Media team since 2003. Throughout her career she has continuously honed her skills and has become a master planner and negotiator in her field.

“I feel extremely honored, especially given the criteria for this award of recognizing success within the industry, along with a dedication to philanthropy and mentoring,” Griffin Jones said. “Leadership, community involvement and creativity are things I’ve always aspired to include in my career and work.” 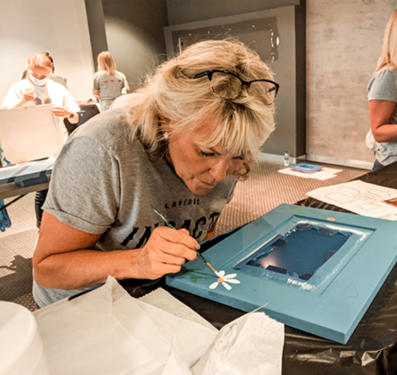 Griffin Jones has long been active in contributing to her professional community. Highlights include:

Griffin Jones embodies the LAVIDGE values and is a constant contributor to LAVIDGE IMPACT, the agency’s corporate volunteer program. She frequently offers her time and comes up with ideas on how the Phoenix-based agency can further support our community. Highlights of her hands-on service include:

Griffin Jones prepared for her career as a media professional by double majoring in Marketing and Radio/TV Communications while earning her Bachelor of Science at Stephen F. Austin State University, in Nacogdoches, Texas.

These days, her role is to mentor the next generation.

On her own time, she volunteered as the Big Sister of Yanet Cardenas for Big Brothers & Big Sisters of Phoenix for three years. It’s another example of how Betsey pays it forward as a mentor.

“I love to help young people entering this business—it’s a tough one to learn,” she said.

Despite being a Phoenix Ad Club board member, Griffin Jones was visibly honored and surprised when she choked up after being called to the stage to accept the Phyllis Ehlinger specialty award. She later confirmed that her fellow board members and agency colleagues at LAVIDGE had successfully kept the results a secret.

Although Griffin Jones was aware her peers with LAVIDGE had nominated her (despite her suggestion to nominate someone else) she was, however, excluded from the board meeting where the judging of the nominees took place. That would have happened regardless because she was a nominee, Griffin Jones explained, adding that it didn’t shed any light on her status in the judging.

“The Ad Club board was sneaky about excluding winner from scripts shared and keeping me busy when the run-through covered the section on Specialty Awards,” she added.

Griffin Jones in her acceptance speech expressed a sense of tradition and heartfelt gratitude.

“This award is meaningful because, over the years, I’ve watched so many women I have admired—especially Alicia Wadas,” she said of LAVIDGE’s EVP/COO who earned the first Phyllis Ehlinger Women of Excellence award in 2018. “Alicia exhibits the grace, knowledge, creativity, and integrity I aspire to incorporate in my career.”

Wadas reciprocated the sentiment in a video presentation in which she and a few more LAVIDGIANS paid tribute to this year’s winner. The larger-than-life accolades were projected on a giant movie-theater screen behind her as Griffin Jones took the stage.

“You have contributed so much to the ad community over the years,” Wadas said. “Your professionalism as a media director, reputation as both fair and kind, and your volunteer service elevates us all. Well done, Betsey. Well deserved. Congratulations.”

Griffin expressed appreciation to those who supported her throughout the nomination process—thanking Ad Club members and agency colleagues alike.

“Because Phoenix Ad Club mostly recognizes ad people on the Creative side of this business, I appreciate the acknowledgement of someone in Media,” she said. “We are as important to the success of this business and although our contribution might not be as creative as someone developing ad campaigns, there is a creativity aspect in planning and placing media.

“At LAVIDGE we have a lot of respect for all departments that contribute to our clients’ success, one of the things that I love about working here.