Business-to-business (B2B) technology companies have been historically conservative. Standing out from the crowd demands courage and the willingness to take some risks.

There are many ways to deploy guerilla marketing tactics. Here are some considerations for B2B technology companies. 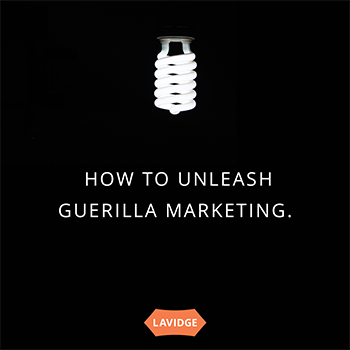 1. Don't be afraid to be outrageous.

Guerilla marketing—the use of unconventional methods to get noticed or make a public statement—can help. Such was the case—literally—when Apple said “goodbye” to its drab-looking Macintosh and PowerMac computers in 1998 and “hello” to shiny new iMac G3s.

The new lineup, initially available in trendy plastic cases which were translucent white and bondi blue (a light turquoise), soon included fruit-inspired colors in tangerine, lime, strawberry and grape. The bold design change also added a carrying handle and an internal modem, a significant upgrade in a field of competitors selling beige machines unable to connect to the internet right out of the box.

The iMac G3, initially marketed to hip, creative consumers, quickly gained status as the cool, powerful alternative to the status quo—giving it legs in the business-to-business market as well with image-conscious corporate buyers.

2. Be relevant to your industry.

IBM kicked off its “People for Smarter Cities” public relations campaign with outdoor signs which doubled as useful amenities such as a bench, rain shelter and a ramp in strategic locations. A follow-up campaign—one of many since the original—featured a giant interactive wall in JFK airport. The billboard-sized interactive screen allowed guests to discover what a Smarter City looks like through sight and touch. 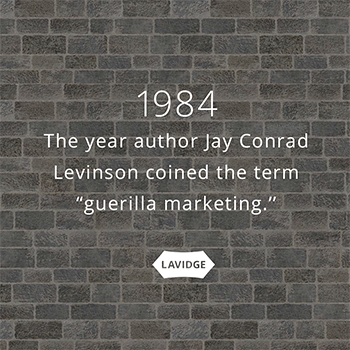 What made these campaigns work was the element of the unexpected in just the right places, at just the right time. The disruptions to everyday things were well-received because they were relevant. It served IBM well in establishing itself as an innovative expert in creating Smarter Cities.

Likewise, your guerilla marketing campaigns should make relevant connections with your audience.

3. Fish where the fish are biting.

Leverage what you know about your customer’s lifestyles, habits, and preferences and create guerilla marketing opportunities accordingly.

Apple did so when it pushed the limits with unofficial, unsanctioned Apple Watch bands during the 2016 Olympic summer games in Rio de Janeiro, Brazil. The bands, available in 14 colors—matching those of the national teams competing, were exclusively available for about $93 each at the Apple store closest to the games.

Apple touted the special edition bands as a once-in-a-lifetime opportunity for its Apple Watch owners. Olympic enthusiasts who traveled from around the globe to attend the games happily took the bait.

4. Invite your customers to participate.

Encourage prospects to actively engage with your brand by inviting them to take part in an experience. Nintendo® successfully leveraged this approach when it released its Pokémon Go® augmented reality app with explosive success in summer 2016. Droves of customers flocked to locations which had piggybacked on the campaign by creating lures—some of them with discounts for showing up to play the game.

The experience also breathed new life into millennial Pokémon fans who hadn’t collected cards since they were kids—but were more than willing to try their hand at “catching them all” as adults. Once they did, they were easily hooked as paying customers. 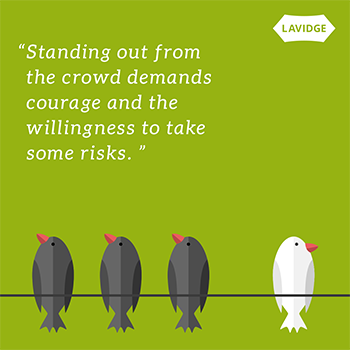 5. Extend the buzz to owned media.

Planning and staging guerilla marketing requires a significant investment of time. Capitalize on a temporary setup or event by documenting it with images and video.

Think about what will play well when shared on social media channels and any company-owned space such as in your marketing newsletters, websites, and blogs. While social media is technically word of mouth, it is often combined with owned media efforts to create a buzz because the channels are under your control and provide instant access to your audience.

6. Partner with an expert.

Guerilla marketing is only one tactic among many that should be considered when drafting your overall marketing plan strategy, and there are definitely risks.

For starters, you don't want to put your company in a position where you need to deploy reputation management because an attempt at lead generation went sideways. One well-known example of guerilla marketing gone bad involved electronic signs placed around several cities to promote a movie based on a Cartoon Network show. The signs had been up for weeks in several cities when one was spotted in Boston by someone who thought it might be a bomb. Then another. The local authorities blew up the first suspicious sign and closed off traffic in the area for hours while they investigated the second.

Another downside is the time it takes to do successfully. If the intended audience doesn’t see or understand your message, you’ve wasted your time.

Partnering with a marketing agency and or public relations expert will help you manage those risks.

LAVIDGE is just such an expert. We can help with creativity, experience and break-through guerilla marketing ideas for forward-thinking technology companies, like yours, to stand out amongst a conservative crowd.

Ready for a one-on-one discussion? Give our Phoenix technology media agency a call at 480.998.2600 or send email to [email protected].

Courtesy of Lumen Learning, here’s a list of tell-tale signs of guerrlla marketing:

This article is a brief abstract of our exclusive and authoritative study that takes the guesswork out of marketing to business-to-business technology buyers. Rather than speculating about what will drive them to action, we've asked them.