Let’s cut to the chase: If your company operates in the retail services industry as a fitness club, nail or hair salon, or lash studio, you should be looking to Hispanics to grow your business. Here’s why.

A quick drive through your neighborhood reveals we’re close to being saturated with retail service businesses. Hair and nail salons dot almost every strip mall. There are two fitness clubs around the corner. A new massage spa seems to open every week. And your local drug store is stocked with 900 beauty and grooming products.

Competition for retail services consumer dollars is fierce, but spending is flat or declining. Except for Hispanics. A 2015 study by Nielsen makes the story clear:

This same pattern holds true for other beauty and grooming products, including bar and liquid soap, hand and body lotion, facial cleansers and shaving needs. Name the category and it’s the same story—Hispanics are now the foundation for retail service, grooming and health and beauty sales. And in an industry where every dollar matters, the Hispanic market can’t be overlooked.

Almost all spending in the retail services industry is discretionary. It would be relaxing to get a massage every week, but we don’t need it. Your hair is getting too long, but you can always delay going to the salon.

Retail services as a necessity

For a variety of reasons, Hispanics view retail services much more as a necessity than the larger population. According to Leylha Ahuile, a senior multicultural analyst for Chicago research firm Mintel, Hispanics believe that looking good is a way of demonstrating success. “In the U.S., you’re talking about a population that’s mostly of immigrant descent,” says Ahuile. “Why do you immigrate? To have a better life, to be successful, so the idea that you look good and your hair is well groomed and you smell good is a way of saying, ‘You know what? I’ve achieved a certain level of success.’”

This multicultural marketing and advertising insight is underscored by recent research conducted by Univision, which found that Hispanics—both men and women—present an essential growth opportunity for retail services and health and beauty brands. Ruth Gaviria, SVP of corporate marketing for Univision, said that Hispanics “derive a significant amount of self-esteem from smelling, looking and feeing their best, and now routinely engage in more refined beauty and personal grooming, such as nail care, lotions and neat trimming, with more frequency than non-Hispanics.” 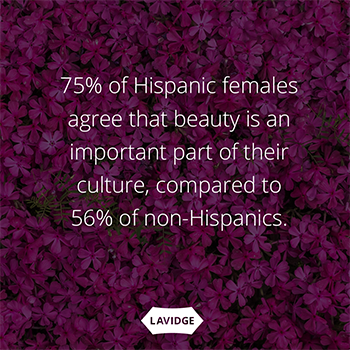 The same study found that Hispanic men are embracing vanidad over machismo. A strict translation of vanidoso is “vain,” but the modern Hispanic male uses the term as an informal way to say, “I take care of myself.” The Univision study reveals that looking good in the workplace (76%) is the most important reason Hispanic men want to look nice, closely followed by attracting the opposite gender (66%).

Univision’s VP of Strategy and Insights, Liz Sanderson, says that for Hispanic women, “what’s on the outside is also important because it empowers her on the inside.” According to Sanderson, “75% of Latinas agree that beauty is an important part of their culture compared to 56% of non-Hispanics. Latinas learn about beauty from their moms at a young age. The love for beauty is passed down from mothers to daughters. In fact, 66% say that they were taught at an early age that maintaining their appearance is important. And it’s not just about looking good for themselves: Latinas are more likely to say that they want to look good so their family will be proud of them.”

As an audience, Hispanics are markedly young and demonstrate great brand loyalty. If your retail services business or beauty and health franchise isn’t marketing directly to Hispanics, it’s time to start. Here are some basic multicultural marketing building blocks to get you started.

Marketing to Hispanics in Spanish is the most overt and obvious way to say you want their business. This is a matter of respect and of making an effort. In many ways, this is the price of admission.

Hispanics appreciate information-rich marketing much more than non-Hispanics (35% vs 17%). Demonstrate why your service or product is better and how it can make life better.

This is advertising 101, but ensure you place your messages where Hispanics are. As an example, Unilever heavily promoted its Degree deodorant brand on ESPN Deportes and sponsored Mexico’s World Cup soccer team. It’s not a coincidence that Degree was named by Hispanics as their most-preferred brand.

Well, that’s also true for the general population, but especially among the Hispanic population. It makes a difference when Hispanics see one of their own endorse a brand.

Like any ethnic group, not all Hispanics behave the same way. As an example, Nielsen reports that those who prefer speaking Spanish in the household spend more on hair coloring, hair growth and other beauty and health retail services. However, “English-speaking preferred Hispanics tend to spend more on hair spray and powders for women than do their Spanish-speaking counterparts.

From smartphones to social media, Hispanics use digital media disproportionately more than the general population. According to Univision’s Roberto Ruiz, “When connecting with Hispanics digitally, think about enticing them with apps, digital coupons, branded contents, ads, loyalty programs, newsletters and blogs.” Media Post reports that compared to the general population, Hispanics are:

LAVIDGE experts in multicultural marketing and advertising can help you reach Hispanic health and beauty and related retail services customers.

To learn more, give our Arizona franchise multicultural agency a call at 480.998.2600 or send email to [email protected].

(Source: Latino Influence Project: How Latinos Are Influencing Non-Latinos Living Among Them, 2012.)