Winners and Losers: The Best Media for Healthcare Advertising

This article is a brief abstract of our exclusive study that takes the guesswork
out of healthcare advertising and marketing.

Media planning is a fine art.

The best healthcare branding will be for naught if potential clients don't see it, digest the message and take action. Medical brand businesses can spend a lot of money developing logos, advertisements, websites and public relations campaigns, but if they go unseen they might as well have never existed.

Enter the full-service agency with skilled healthcare industry media planner and buyers. These are the accomplished professionals who dig deep into the behaviors and media consumption habits of audiences. Their job is to figure out how to reach potential clients by developing an effective healthcare marketing strategy. Where do target markets live and what media do they prefer? What is the most effective media mix?

With so many different media competing for attention, it's more difficult than ever for healthcare professionals to break through the clutter in medical marketing to get noticed. This is especially difficult for those in the healthcare industry, which must often contend with communicating highly complex subjects. From health insurance plans to hospitals, healthcare companies have long been challenged with developing the perfect marketing campaign to reach consumers in a measurable way.

To make the healthcare media planning/buying job a little easier, LAVIDGE commissioned a groundbreaking survey of consumers throughout the Southwest to take some of the guesswork out of selecting media for your target audience.

Nielsen has reported that TV viewership is declining. And TIME said that "the long-prognosticated death of TV may be happening before our eyes." This might be true, but don't tell that to our survey respondents. When it comes to their preferred media to receive healthcare information, TV is king. 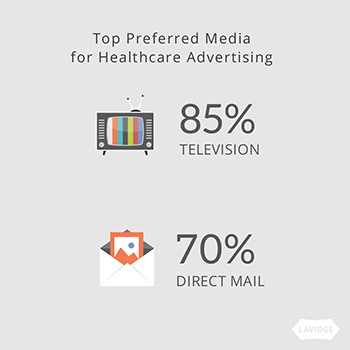 To be sure, TV is a monster among advertising media platforms. According to a 2016 Nielsen study, the average consumer spends 32 hours a week watching TV. The older you are, the more TV you watch: 18 to 24-year-olds watch 14 hours of TV a week, while those 65 and older consume more than 48 hours of TV each week.

It's well accepted that the older we get, the more likely we are to access the healthcare system.  Our bodies age. Arteries get clogged. Knees and hips need replacing. This is why health insurance costs more as you get older.

But favoring TV over other media for healthcare information is quite another thing. With few exceptions, this preference transcended age, gender and education. Men and women ranked TV marketing tactics highest, as did all education levels. Respondents with a high school education or less topped the charts, with 94.9% of them ranking TV highest.

One of our respondents put it bluntly: "Everybody watches TV and I believe it's the best way to get a message across." Another respondent echoed this sentiment: "This is the easiest way to reach me because TV is the one I use the most and pay attention to."

We expected the internet to perform strongly in promoting healthcare, medical practices or medical organizations, which it did at 51.7%. But it was beat by direct mail (70.8%), an old but apparently still effective media channel for healthcare marketing efforts.

The Data & Marketing Association reports that direct mail volumes have declined 1.9% year-over-year since 2005. However, the nature of healthcare marketing lends itself well to media where long-form content marketing can explain complex matters. To understand a health insurance plan, it is often necessary to review lengthy documents, charts and fine print. With mailbox clutter decreasing, marketers should consider listening to our respondents and contemplate a media marketing strategy that incorporates direct mail.

One of our respondents said, "l look at each piece of mail I receive, and read the ones I'm interested in learning more about. I rarely pay attention to internet ads and I won't talk to telemarketers."

At 51.9%, newspapers just nipped the internet (51.7%) in the survey, which was also unexpected. But no matter what you've heard, newspapers aren't dead. While print editions have suffered over the years, newspaper publishers now distribute content on multiple platforms, including online. According to a recent Nielsen Scarborough study, "More than 169 million adults in the U.S. read a newspaper in a month—whether it be in print, on a website or via mobile app. In total, newspapers reach 69% of the U.S. population in a given month."

According to Nielsen Scarborough data, here's how newspaper readership by platform shakes out:

Although we didn't specifically ask our respondents which newspaper platform they preferred, we suspect they were referring to a print edition. In any case, our respondents believe newspapers are a great resource for consuming information about the healthcare industry.