Why Your Hispanic Healthcare Marketing Efforts Are Failing

If you believe the growing Hispanic population is a boon to physicians, hospitals and insurance plans in the Southwest, think again. Disproportionately, they’re staying away from professional healthcare.

Hispanics comprise 17.6% of the United States, but New Mexico boasts a Hispanic population of 48%. Other states in the Southwest are close behind; 39% in California and Texas, and 31% in Arizona.1

Healthcare industry members of leadership all agree that they want to cater to this growing and influential group. They’re working hard as organizations to attract Hispanics to their practices, waiting rooms and insurance plans.

But they’re failing, and the numbers are staggering: 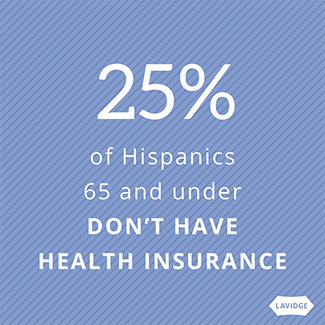 Dr. Martha L. Daviglus, M.D., Ph.D., a cardiovascular epidemiologist at Northwestern University, said, “Hispanics are more likely to delay care, drop out of treatment when symptoms disappear and avoid visits to the doctor.”

This reluctance to access the healthcare system is concerning, because Hispanics suffer diabetes, liver diseases and accident rates higher than the general population. And cancer and heart disease are their top causes of death.

Where are Hispanics being treated?

If Hispanics aren’t seeing a doctor, where are they going?

Most often, the answer to that question is mi familia. A longstanding tradition in the Hispanic culture is to seek advice within the family. After all, why trust someone you don’t know? This often results in treatment with alternative or folk remedies, which may or may not be effective. And it also means that some potentially embarrassing ailments go unaddressed, such as sexual dysfunction and mental illness.

It’s always a mistake to generalize any ethnic group, but to a significant extent Hispanics have a strong sense of family, pride and privacy that often manifests itself in not asking for help.

When Hispanics do see a doctor, it might be in Mexico rather than the United States. Research by the Center for the Study of Latino Health and Culture at the UCLA School of Medicine found that nearly a half million California Hispanics travel south of the border every year, where treatment is cheaper, faster, friendlier, and easier to understand.

Any marketing and advertising strategy developed to target this consumer segment needs to take into account these cultural values to ensure that marketing campaigns, social media, digital marketing or public relations are most likely to evoke a positive experience. A multicultural advertising agency can lead the way. 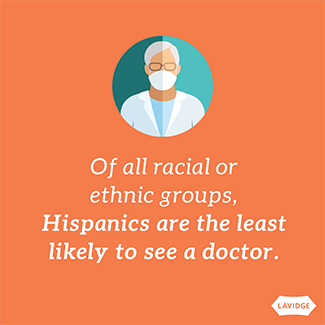 Most healthcare organizations haven’t done their multicultural advertising and marketing homework. They know it’s good business to attract Hispanics. Indeed, they could carve out a lucrative niche if they were known as being “Hispanic friendly.” But there are hurdles to overcome.

First, we must work hard to overcome the perception that undocumented immigrants will be deported if they access healthcare in the United States. Right or wrong, Barack Obama became known as the “deporter in chief” because nearly 2.5 million undocumented immigrants—many of whom were Hispanics—were escorted out of the country during his years in office. President Trump’s “building a wall” mantra is causing his administration to appear even more inhospitable. Within the Hispanic community, there is fear that going to a hospital, seeing a physician or buying insurance via the Affordable Care Act will result in them being identified as someone who should be expelled.

This distrust could work in a healthcare company’s favor if, for instance, they marketed their institution as being a “safe” hospital or practice. It definitely would open up business opportunities to reach out to new clients with the help of an experienced multicultural advertising agency.

But the biggest barrier to Hispanics accessing U.S. healthcare is literacy. Despite the growing size of the Hispanic population, it’s unfortunate to see that many healthcare institutions still do not make access easy. It can be difficult for many Hispanics to navigate a healthcare system that still emphasizes English, especially for older or first-generation immigrants.

If you can’t read English, how can you understand facility signage? How can you fill out forms or speak with a nurse or physician who doesn’t understand your language? And if you are unaccustomed to navigating our byzantine healthcare financial system, how can you make sense of multiple medical bills from doctors, providers and labs?

There is a huge opportunity for healthcare institutions to take the time to truly understand the barriers that are keeping Hispanics away, and to create a simplified system. The place to start is understanding that healthcare is a family affair. If abuela needs to see a physician, she’ll likely be accompanied by her children and grandchildren. At the very least, waiting rooms should be bigger, more inviting, warm and welcoming for seniors and their families alike.

Hospitals and practices should make a concerted effort to provide Spanish-speaking personnel, from the admitting desk to nurses and physicians. That’s not easy, because there is a significant and growing deficit of Hispanic doctors in the United States. Still, this cultural approach of communicating and following through in a way that Hispanics want to be treated is the way to win and keep their business.

Savvy healthcare marketers should avoid the often-embarrassing tactic of simply translating (or transcreating) advertising messages into Spanish and switching to a photo of someone who appears to be ethnic. Placing a logo at an event attended by Hispanics will be ineffective if not accompanied by an open hand.

Effective multicultural healthcare marketing needs to be authentic . . . and must be perceived as authentic. Physicians and other healthcare institutions should consider establishing practices in geographic areas where there are large Hispanic concentrations. They can partner with local Hispanic community organizations such as, in Arizona, Si Se Puede Foundation, Chicanos Por La Causa or the Cesar Chavez Foundation. Getting involved with local school districts is another grassroots tactic that can bear meaningful fruit.

None of this should come as a surprise. It’s long been known that the best way to market and communicate with people is to talk to them like a friend or family member—in their language and in a culturally relevant way.

Not sure where to start? No problem. LAVIDGE experts in reaching Hispanic markets with effective multicultural campaigns can point the way.