Hitting Back at Fake News

What to Do When the Fake News Epidemic Hits Your Healthcare Organization
Anne Robertson, Managing Director, Public Relations
Share This:

In 2012, North Korea’s Kim Jong-un rejoiced when he was named the Sexiest Man Alive.  The announcement of Kim’s award stated, “With his devastatingly handsome, round face, his boyish charm, and his strong, sturdy frame, this Pyongyang-bred heartthrob is every woman’s dream come true.”

Kim and his allies were thrilled. NPR reported that the official Chinese website, People’s Daily, ran the entire citation along with a Kim greatest-hits slideshow. It’s too bad for Kim that the honor originated on The Onion, a well-known satirical U.S.-based website.

Kim’s not the only one to fall for fake news. Some people claim that malicious and deliberately false news stories swung the election away from Hillary Clinton. We’ll never know if that’s true, because we can’t measure every voter’s decision-making process. But there’s no doubt that the proliferation of fake news is a phenomenon that must be taken seriously.

A frustration of dealing with fake news is recognizing it. The Onion, for example, isn’t the kind of fake news that is concerning. More akin to media outlets such as Saturday Night Live or Mad Magazine, The Onion proudly proclaims its satirical mission on its home page: Tu Stultus Es. In Latin, that means “You’re an idiot.”

While Kim might not have been able to identify that The Onion wasn’t real news, most U.S. readers weren’t fooled. Similarly, most Americans probably take what they read in The National Enquirer with a grain of salt. Traditional advertorials or sponsored news (a.k.a. native ads) aren’t considered fake news, but few serious journalists respect such articles.

Here, we’re most concerned with news reports, articles and tweets purposely created and disseminated to harm and mislead. Sometimes the news sites look fairly real—check out Huzlers and Empire News. The operative word here is intent. If the strategy behind the phony article is to sway opinion and harm a business or person, then it’s fake news.

Why do people create and spread fake news?

The agenda can be mischievous, self-serving or nefarious. It’s well accepted that forces in Russia propagated fake news to discredit Hillary Clinton, using a network of botnets, paid human “trolls,” scores of bogus websites and social media. Fake news can generate significant traffic which, in turn, can increase ad revenues. And when the headlines hit Twitter or Facebook, unsuspecting readers often share, like and re-tweet the “stories.”

BuzzFeed conducted an analysis that found a disturbing trend:

“During the final three months of the U.S. presidential campaign, the top performing fake election stories on Facebook generated more engagement than the top stories from major news outlets such as The New York Times, Washington Post, Huffington Post, NBC News, and others.”

Unfortunately, many people can’t distinguish between sponsored, legitimate or fake news. In 2016, Stanford History Education Group conducted a study of middle school, high school and college students. The results are shocking: “More than 80% of students believed that the native advertisement, identified by the words sponsored content, was a real news story.” 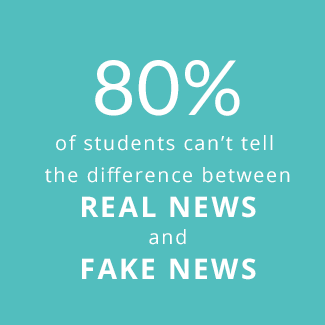 For many people and businesses, fake news is a nuisance. But for those in the healthcare industry, including organizations such as hospitals, clinics, insurance companies, labs, medical device manufacturers—it can cause serious problems. What if your hospital is the victim of a false feature about an incurable bacterium spreading among patients? Or what if your health insurance company is hit with a counterfeit story about denying legitimate claims? The results could be disastrous—lost revenue, lawsuits and loss of public trust.

The first step is to be prepared. Sooner or later, a false headline can impact your healthcare institution. In order not to improvise or rush a response, it’s wise to create a strategic media outreach plan that will guide you, just in case. Develop a formal fake-news process and add it to your public relations crisis communications protocol. Revisit the reputation management protocol on a regular basis by practicing your crisis response regularly with your team. You should include your PR agency in your crisis-related strategic marketing planning, so they will be ready to help when things get real.

If you are faced with a fake news scenario, immediately determine its source and publicly identify the culprit. It’s important to be aggressive and quick. Delays or silence can lend legitimacy to the false claims. That could result in state health agencies knocking on your door. Finding the source can be challenging without engaging the expertise of cyber or computer forensic expert professionals. Your healthcare public relations agency is a good place to start. You need to protect your branding.

Malicious and widespread fake news leveled at highly visible healthcare organizations could also lead to panic. So although the allegations may be untrue, you should treat them as if you were engaged in a real public relations and marketing emergency. Going public—and perhaps holding a well-publicized news conference—may be a good strategy.

If the fake news were actually true, would you hold a news conference? If the answer is yes, then your marketing communications spokespeople should get in a front of a microphone without delay. Be prepared to offer media tours of your facility. Make your medical staff available. Invite state and other governmental agencies in the community to participate. Your public relations agency should be able to assist you with these efforts. When facing a fake news attack, the best defense is an aggressive and transparent offense.

Another way to fight lies is to use the weapon most preferred by the shadowy perpetrators of fake news: social media. Hit back against unsubstantiated claims by using Facebook, LinkedIn and Twitter. Encourage your employees to share your posts.

So be alert. Be prepared. And fight back.

Not sure where to start? No problem. LAVIDGE experts in public relations for healthcare professionals can point the way.

Be ready to respond to fake news when it hits. Here are five steps to help you prepare.