Is Out-Of-Home Advertising Right for Restaurants?

Get out!
Betsey Griffin Jones, Media Director
Share This:

You’re driving down the road and suddenly your stomach tells you it’s hungry. Yep, time for lunch. Then you drive by a billboard promoting a nearby restaurant and, bingo, you’re there. 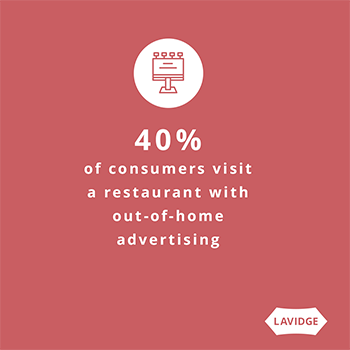 That’s the beauty of out-of-home (OOH) advertising. It’s visible, immediate, and you can’t turn it off. For restaurants, this tried-and-true marketing tactic has been proven to drive traffic, serving to remind and entice consumers. A recent Arbitron study found that nearly 4 in 10 (39%) people who viewed a billboard or another out-of-home media in the past month visited the store they saw advertised. The same study found that 40% of consumers report visiting an outdoor-advertised restaurant.*

Many businesses are tempted to abandon or cut back on traditional media, but it would be a mistake to do so, especially for restaurants that rely on foot traffic and late deciders. Other than television, out-of-home advertising might be a restaurant’s best friend.

Here’s what restaurants need to know about OOH marketing strategy.

There’s more to outside advertising than billboards. The Outdoor Advertising Association of America divides out-of-home advertising into four categories.

Many businesses—not only restaurants—are tempted to turn billboards into print advertisements. It’s important to remember that billboards are primarily meant to be seen, not necessarily read. A good rule of thumb is not to have more than six or seven words on an out-of-home message. Consumers can’t absorb your message if you try to jam too much into it. How long does it take to drive by a billboard? Your branding needs to be immediately identifiable and your message instantly understood.

Restaurants may only need a fantastic, enticing photo of something delicious and their logo. Maybe a clever headline to go with it. Consumers will see your advertisement for a brief moment. Make them hungry.

Some businesses don’t appreciate outdoor digital advertisements, because the space may be shared by seven rotating companies. That will mean an ad is seen by fewer people than a static billboard. But it’s less expensive to contract a digital display. You’ll also save money by not having to produce expensive vinyl.

But alternating ads from multiple companies is also a benefit. Fluctuating ads attract more eyes than static billboards that remain unchanged for a long period—those can start to seem like wallpaper with passive messages. Truly, change is good.

Another benefit of digital is that they can be changed on the fly. You can display a new ad pretty much anytime you want. If one creative message doesn’t seem to work, then try something new. You can even have ready a variety of ads that are keyed to the weather. If the temperature soars, you can quickly enable your digital ad that tempts consumers with ice cream or a cold specialty drink.

Digital billboards can easily be programmed to aid a restaurant’s changing menu throughout the day—promote a lunch special until 2 p.m., then switch the message to one with a dinner enticement. Or change the board every day to advertise Taco Tuesdays or Friday Fish Feast.

Out-of-home advertising is also great for helping consumers locate your restaurant if it’s hidden. Some restaurants don’t need help being found—their buildings are in uncongested suburbs or rural areas, sometimes identified by a sign that can be easily seen from all directions.

But other restaurants find themselves on out-of-the-way streets or in busy urban centers, blocked by tall buildings. For those establishments, directional marketing might work well. You’ve seen billboards and bus shelters that say “turn here” or “just a mile ahead.” Without directional advertising, consumers might miss the restaurant entirely and end up eating at a competitor.

There are quite a few cites that don’t allow billboards in an attempt to beautify their communities. But don’t worry; there are other advertising avenues that can be just as effective, such as in-cinema advertisements shown prior to a movie. And there are several small but very effective outdoor tactics as well, such as the small signs on top of gas pumps.

LAVIDGE has expertise in OOH media buying and developing creative for outdoor advertising. Our full-service advertising agency will work closely with the media team to create an out-of-house media marketing and advertising strategy perfect for driving more customers to your restaurant.

10 steps to a great billboard ad

Paul Suggett at The Balance has some great advice about building a better billboard advertisement.**