Residents of two senior-living communities who love to give back were recognized last month by local media, thanks to the efforts of LAVIDGE Public Relations.

Of course, it helped that LAVIDGE PR clients Timber Ridge in Issaquah, Wash., and Emerald Heights in Redmond, Wash., each have woodworking groups which each created hundreds of wooden toys to donate to various charities in Seattle. 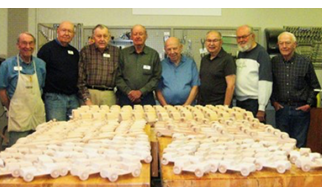 Including the most recent delivery, the Timber Ridge Sawdusters have provided 1,567 toys to current and past patients of Seattle Children’s Hospital.

Twelve residents of Emerald Heights, who created the group in 2014, use saws, sanders, and other hand tools to create wooden cars, blocks, airplanes, tugboats, dinosaurs, baby doll cribs and other toys. A crafting group at Emerald Heights supports the toymakers by creating cloth drawstring bags for each set of wooden blocks.

LAVIDGE secured local coverage for them in the Redmond Reporter and Seattle's 425 Magazine, as well as coverage in Senior Living.