LAVIDGE IMPACT Gives Shelter Dogs (and a Cat) a Break

PHOENIX (Feb. 7, 2020) - About a dozen shelter dogs housed at the Arizona Humane Society's Campus for Compassion in southwest Phoenix got the chance today to enjoy a little fresh air, sunshine and a good roll in the grass while interacting with volunteers, thanks to LAVIDGE IMPACT. 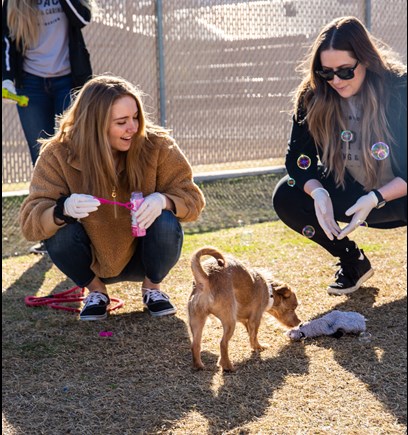 It also gave 19 agency employees a break from their daily work to focus on giving back to the community they serve. Instead of pitching or working on ad campaigns, volunteers spent the first part of the morning tossing balls, scratching bellies, offering snuggles and handing out tasty treats. Eager recipients among many included a Chihuahua named Moe, a terrier mix named Havanna, and a Labrador-Retriever mix named Ziggy.

IMPACT volunteers had also the chance to interact with a 6-month old American shorthair cat named Vibe. Mostly, Vibe hung out in a special cat tent while volunteers made cat blankets and toys by cutting and tying fleece.

A few volunteers got the chance to hold the cat with markings described by some as tortoise shell and calico by others. It is one of many felines now available for adoption. The Arizona Humane Society also takes in small critters such as rabbits, rats, hamsters, ferrets or small birds. And while they do care for small critters such as tortoises and hedgehogs within their Education & Outreach Animal Teachers area, they are never up for adoption. 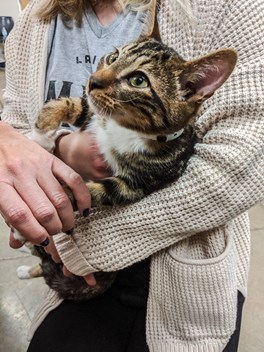 IMPACT Committee Chair Sandra Torre, who also serves as Executive Vice President and Chief Financial Officer for the Phoenix-based agency, said she appreciated everyone who participated. A pet owner herself, Torre said service opportunities to benefit animals or children are central to IMPACT's mission.

While LAVIDGE IMPACT worked with many children's organizations during its inaugural year in 2019, today's event was the first to focus on animals.

Arizona Humane Society Volunteer Coordinator Caitlyn Quintanar followed up with a thank-you email, including a link to numerous photos.

"Without groups, just like yours, we can’t do what we do for the Valley’s sick, injured and abused homeless pets," Quintanar's note said. "We are truly grateful for the impact you made for our pets and organization."