Part of District 3 in the Verde Division, Area 5, LAVIDGE Ad Libs joins 358,000 individuals in 143 countries who collectively form more than 16,800 clubs focused on developing public speaking and leadership skills. The non-profit organization is one of several LAVIDGE recommends for professional development and covers some of the cost of such as Arizona Innovation Marketing Association (AZIMA), the American Marketing Association (AMA), and Phoenix Ad Club (AAF Phoenix). 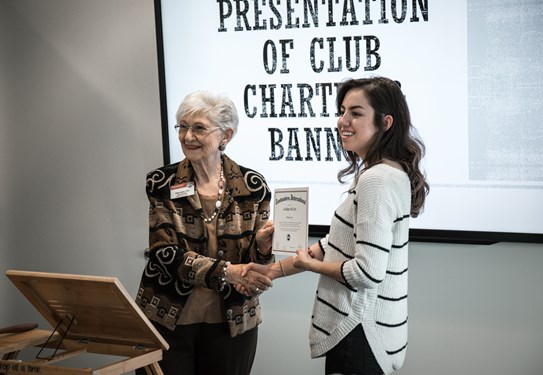 It all started more than a year ago, and has taken the efforts of many to make the Camelback Corridor-area club a reality.

Vasquez, who joined LAVIDGE in early 2018, had participated in Toastmasters at another agency. Being new to agency life, Vasquez said the club gave her an opportunity to integrate herself into a new workplace and create connections outside of her small team.

“I learned leadership, speaking skills and goal-setting, all within hour-long club meetings,” she said.

Naturally, the book publicist wanted to recreate the experience at LAVIDGE.

Starting the club, however, was no easy task.

“There was quite a bit of research that went into the creation of the club,” Vasquez explained. “I had to provide all the details of how the club would function to be granted permission from LAVIDGE to begin.” 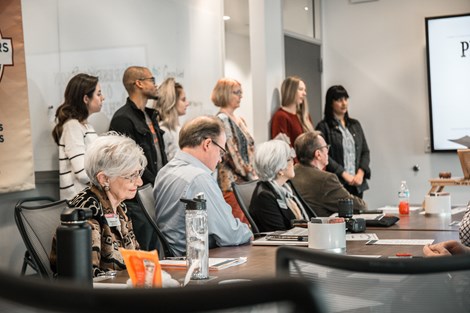 Once Vasquez generated enough interest among co-workers to support a demo meeting, Toastmasters assigned a mentor to set up an event at LAVIDGE. Adams, a Distinguished Toastmaster, came through with an agenda—complete with handouts and two guest speakers.

Fewer than a dozen LAVIDGE employees attended that first meeting in November 2018, which led to several more meetings, the election of officers and the formation of what Toastmasters refers to as a prospective club before it becomes officially recognized.

“A lot of work and love went into those beginning meetings, and every meeting since,” Vasquez said.

“I found Courtney professional and enthusiastic,” Ethiraj said. “The club was set up in a professional yet friendly environment. I found all members welcoming and interested in the Toastmasters program.”

Mayer, who began her role as a mentor in July, agreed.

“The minute I walked into the first meeting, I knew that the club was special,” Mayer said. “They have a trendy, fun and supportive vibe.”

While the mission of the international non-profit organization is to provide education, meeting a minimum membership requirement before being allowed to charter meant recruitment was a major focus early on. This led to opening meetings to other tenants of the UBM Bank Building. The club still wasn’t able to move past a rolling roster of 16 to 19 members—just shy of the 20 needed to charter. 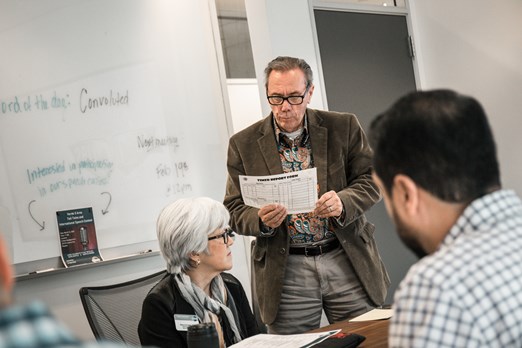 After several more months—and at the suggestion of club mentors—the council voted to make membership open to all. This made it possible for Ethiraj and Mayer to invite colleagues from work or other clubs to visit, and potentially join.

Dan McGinnis and Joseph Barker were among those invited by Ethiraj, both of whom joined after several guest visits.

“I just felt I could help it grow, help the members overcome their fears of speaking,” said McGinnis, who is a Distinguished Toastmaster with multiple club memberships.

“Everyone, though new, seemed very eager to make this club into something special,” added Barker, who also belongs to more than one Toastmasters club. “The quality of a club really comes down to its people. I also bring a bit of experience and felt I could contribute.”

Now that the club is official, the council can pivot from intense membership recruitment to more in-depth professional development. 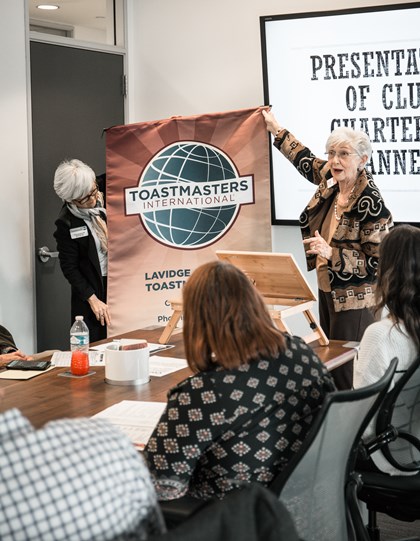 “Our main focus is to retain members and provide beneficial programming,” said Vasquez, who is open to doing things differently to keep members engaged. That includes occasionally playing the SuperFight card game or using other creative ways to get people talking during Table Topics.

Traditionally, a Table Topics Master prepares questions to pose to members and guests who volunteer or are invited to answer them on the spot within a strict time limit and without using filler words or crutches such as uhm, ah, and so on.

“Our challenge is to continue making the club the right fit for members,” Vasquez added. “By taking input from members and setting new goals for our club, the club will be constantly evolving so that it remains a helpful and significant resource for all who attend.”

From Mayer’s perspective, Vasquez is already doing just that.

“Courtney is a natural poised leader,” Mayer said.  “She has driven the team to meet the charter expectations with excitement and grace.”

Krista Tillman, a member of the Ad Libs Council, expects to achieve similar results from her participation in the club. Already, she’s given multiple speeches and regularly participates in table topics and functionary roles.

“As a young professional, I joined our Toastmasters club here at LAVIDGE to improve my public speaking skills, which is important in the field of public relations,” said Tillman. “I am excited to learn from others, grow as a speaker and improve.”

Meet LAVIDGE, an employee-owned ad agency specializing in discovering and communicating insights which engage, motivate and inspire. From building brand awareness to driving revenue, from positioning thought leaders to enhancing perceptions, it's why we do what we do. Our unified marketing approach encompasses advertising, public relations, and digital marketing. And we've been doing it successfully since 1982 for clients in healthcare, real estate, education, technology, sports, personal care, food service and government. Intrigued? Visit us at LAVIDGE, add us on LinkedIn, follow us on Twitter, and like us on Facebook.