PHOENIX (Aug. 21, 2021) — This year, at the 27th annual VYTal Affair-athon, Bill Lavidge was awarded with the Individual VYTALITY Award this past Saturday from Valley Youth Theatre (VYT). This award is given to someone who stands out as a vital contributor to VYT.

Bobb Cooper, Producing Artistic Director of Valley Youth Theatre, said, “In looking for an individual to honor this year, Bill Lavidge came to the top of the list. All through this pandemic, he inspired his team at LAVIDGE to continue supporting VYT pro-bono with our website for us to effectively reach our audience during this time.” He added, “There are heroes among us, and I am honored to call Bill a truly kind, generous and amazing hero!” 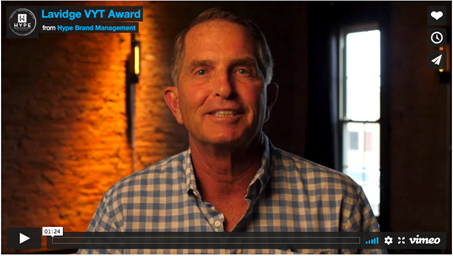 Bill Lavidge, president and CEO of LAVIDGE, a marketing and communications firm founded in 1983, accepted the award through a pre-recorded video released during the virtual fundraiser.

“I may be accepting the VYTALITY Award, but it’s the people of LAVIDGE who really deserve it,” Lavidge said, adding that the agency has a long history of providing VYT community support since its inception. “So when VYT asked us to provide marketing communications help to them some 15 years ago, our folks were happy to help. We love the impact VYT has had on thousands of families, either through participation and/or attending Valley Youth Theatre programs.”

While Lavidge was not able to attend live webcast, the second of two presented virtually since the beginning of the pandemic, he did encourage others to tune in to view performers from nine years old to VYT alumni, and even some who have performed on Broadway.

The goal was to raise money so the nonprofit theatre can continue provide inexpensive tickets and fee-free productions. All funds raised from the related silent auction and viewer donations contributed during the event will support another season of award-winning productions and programs that help young people achieve their full potential through meaningful engagement, education, and excellence in the performing arts. It also supports VYT’s award-winning community outreach programs.

Learn more about VYT at vyt.com.