The award, representing a rare and prestigious honor, is presented to those who demonstrate exceptional service in support of the community service mission of the FBI Citizens Academy Alumni Association. 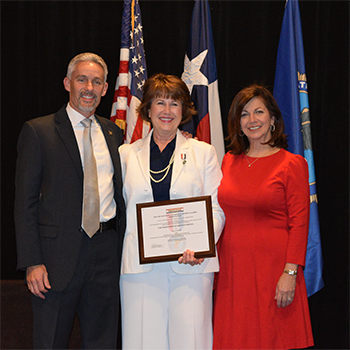 "Alicia is not only a committed leader for LAVIDGE, but also committed to helping our community,” said LAVIDGE President and CEO Bill Lavidge.

Wadas has been serving the National FBICAAA mission since 2015, beginning as a regional chapter coordinator. She was elected to the national board in 2016 as director of training for 60 chapters nationwide, and in 2017 became vice president, communications & conferences.

Wadas oversees a volunteer team of eight from around the country and as a member of the national board, works closely with FBI Headquarters.

“It’s my privilege to serve and support the community outreach mission of the FBI, an organization of hard-working men and women,” Alicia explained. “My volunteer role is gratifying with service to others and the knowledge that what we do helps to keep our communities safer.”

Her passion for the association has also encouraged LAVIDGE co-workers Anne Robertson, managing director, public relations and Betsey Griffin, media director to apply to the program and graduate from the FBI Phoenix Citizens Academy.

FBINCAAA serves as the official governing body, interface and liaison between FBI Headquarters and the local chapters. Members support the community outreach efforts of the FBI by encouraging the development, growth and effectiveness of chapters throughout the country.

Meet LAVIDGE, we’re an employee-owned ad agency specializing in discovering and communicating insights which engage, motivate and inspire. From building brand awareness to driving revenue, from positioning thought leaders to enhancing perceptions, it's why we do what we do. Our unified marketing approach encompasses advertising, public relations, and digital marketing. And we've been doing it successfully since 1982 for clients in healthcare, real estate, education, technology, sports marketing, personal care, food service, and government. Intrigued? Visit us at LAVIDGE.com and get social with us on Facebook, Twitter, Instagram, and LinkedIn.