PHOENIX (March 13, 2020) – LAVIDGE and its employees earned recognition at the 2020 Phoenix ADDY Awards which, due to social distancing guidelines, were presented virtually this year during a live webcast hosted by the Phoenix Ad Club.

LAVIDGE took home Gold and Bronze awards for the agency, in addition to two additional awards earned for work completed individually or contributed to by LAVIDGE employees. 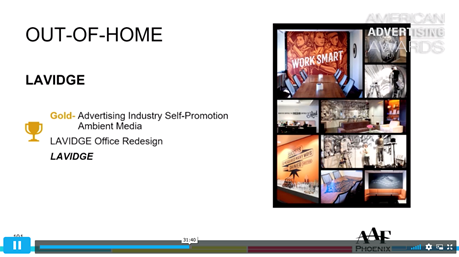 In addition, LAVIDGE congratulates Bob Case for winning a Gold award for an illustration he submitted individually; and Jenn Monroy, President, AIGA Arizona, for her role in the prestigious Art Direction of the Year Award for Design Week Evolve.