How to differentiate your creative from the competition
Shaun Jensen, Creative Director | Bob Case, Chief Creative Officer
Share This:

Standing out in today’s crowded market is tough—but possible—for brands willing to put in the effort.

Here are seven tips to differentiate your brand with creative.

There was a time when companies could stay on the sidelines of public debate. Steering clear of hot-button issues was not only possible but recommended.

Those days are largely gone. We as consumers no longer let them off the hook. Millennials, in particular, don’t allow you to be impartial as a brand. They want you to have a perspective. 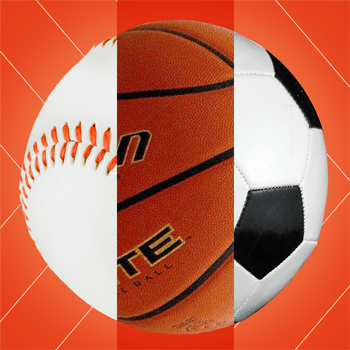 This is where knowing your audience becomes critical. You won’t sell to every subgroup so you’re going to have to choose. We recommend looking beyond market share and aligning with the group most loyal to your brand. What do they believe?

Of course, by taking a stand, you are going to offend some. You can take your initial hit, but if you know your core audience, you can benefit from it as well. And showing your most loyal customers you share the same goals and values will serve you well over the long haul.

In Nike’s case, Big Data played a significant role. The statistics were there to support its decision to make former NFL quarterback Colin Kaepernick the face of its “Just Do It” campaign for the 30th anniversary of the iconic slogan.

While choosing Kaepernick injected a political bent, Nike didn’t make the spot about him, per se. It’s the story of Nike. It’s about setting goals, even crazy goals. The video uses creative work depicting world-class athletes overcoming adversity to do great things. They pay it off with Kaepernick, but it is very much aligned with who Nike has always been as a brand.

Yes, the stock market reacted poorly initially. That’s not surprising considering the connection to police brutality protests Kaepernick initiated in 2016 by declining to stand during the national anthem when it was played before NFL games. The protest evolved as it spread with several players on many teams throughout the league choosing to take a knee during “Star Spangled Banner”—creating a middle ground between standing or sitting on the bench.

The story continues to play out with some fans in support of the movement. Others take deep offense on behalf of the American flag, military members and their families and veterans. To say the issue has had a polarizing effect would be a severe understatement. Nike knew all this and not only took a side but aligned itself with the most controversial player.

Nike’s research turned out to be spot-on. Despite initial backlash, the expected boost in sales came through, thanks to edgy creative which breathed new life into a 30-year-old campaign.

Cheerios and Tide similarly infused their creative with controversy when each introduced same-sex couples into their ads. Microsoft, Apple and Starbucks were forced to take sides on immigration due to their employee bases having strong ties to the issue.

In the past, ideally, brands would never do this. It was too polarizing. Now, consumers are demanding that brands take a stand.

It’s not enough to know your audience. Before taking a stand in your creative, you need to know who you are as a brand. This requires some soul searching on the part of your company. What do you believe? And, if it doesn’t match the opinions of your most loyal subgroup of fans or consumers, are you comfortable aligning your brand with them?

The best time for introspection is before public pressure arises. Know whether you are a ketchup company or a mustard company, for example, before you are seated at the table. That way, when it’s time to make a move you’ll be better positioned to respond well.

Finally, choosing not to have an opinion is still an opinion. If you truly believe it is best not to take a stand, make THAT your stand. Let your customers know you are purposefully abstaining, and why.

Knowing who you are is a great step. Before you can take action, you’ll need a plan. That’s where your creative strategy comes in. This includes establishing your brand personality and tonality. It takes effort to get to there, but when you understand your position in the world, it becomes easier to accomplish.

Your strategy should guide creative, so your organization can produce unified messaging across all channels. With more than a dozen touch points on a consumer journey, for example, the message needs to be consistent from beginning to end.

There are many ways to stand out. Dollar Shave Club has mastered the art of being the underdog and in the process has become a strong competitor to long-time razor giant Gillette. Where Gillette produces ad creative with a professional look and feel, Dollar Shave Club relies on low price, value and humor to push its razors—with a dash of irreverence.

By offering a simple razor for $1, instead of pushing yet another $7 razor, Dollar Shave Club immediately grabs attention. The lifetime value of a club member can more than make up for the difference in price. Once buyers are committed to an auto shipping program to save money on razors, they may never again even look at the $7 razor on the shelf.

Clearly, being the “best” isn’t always necessary. So pick a category—whatever it is—and own it.

Not the underdog sorta brand? No problem. Being the authority also works well, especially in sports marketing.

That’s because people are drawn to the experts. Consider the value of connecting an athlete to your brand, say, if you are a healthcare provider. Just like investors go to Warren Buffett for financial advice, consumers are more likely to visit a healthcare provider billed as good enough to care for top athletes. It’s a way to show greatness by association, and a win-win licensing opportunity for teams and healthcare organizations.

Master Class uses this principle to market a wide range of experts, including athletes. The messaging tells consumers they can improve their own athletic skills by working out with an expert.

With Phiten, we took advantage of the power of association. We knew that if professional athletes looked cool wearing Phiten jewelry fans would want to wear it too. It worked. A similar plan can work for you as well.

Graduate to a formal plan

This is all amazing stuff. Statistics show, however, that while many businesses take the time to identify a strategy, only a small percentage develop a formal plan. It’s not good enough to have a strategy—even a great one. You have to use it.

Allocating a budget and other resources to execute your strategy will immediately elevate your ideas to actions, successfully differentiating yourself from brands that never get that far.

Given the current political climate, knowing where you stand and how you intend to react is especially important. You can wait until everyone’s taking some sort of stand or get into it now. Everyone will get there, but the organizations that get there first will steal market share from the ones which wait.

Once you launch a formal strategy plan, you need to keep it interesting. With so many channels and touch points you have to have more engagement or deeper conversations so you’re not giving consumers the same thing over and over again. The conversation needs to evolve.

Think of it this way. If you’ve aligned well with a group of people and have earned the right to a conversation, you need to have a better conversation.

While the messages should deepen, it needs to be gradual and subtle. You might consider slicing in a few new ideas over time like adding pieces of complementary fruit to a salad. Do not jump from “apple,” “apple,” “apple,” “apple” on messages one through four and skip to “grapefruit” for message five. It’s too jarring.

It would be a shame to have a string of 15 or 16 positive touch points and then lose a consumer on the 17th because the message felt so out of place. Just one negative touch point can ruin that relationship.

Mixed messages are a real danger for larger companies where marketing creatives and public relations writers don’t share open or frequent communication. As a result, they might be sending very different messages to communicate with the same audience.

So, while differentiating your message in the marketplace, make sure internally you are all on the same formal strategic plan.

Your consumers will thank you.

Not sure where to start?

LAVIDGE has worked with teams, retailers and sponsors in connection with a variety of sports in multiple states. We can help you too.

Why doesn’t your creative stand out?

It’s tough to come up with creative that breaks through. How does yours stand up to the competition? If you are struggling, you’re not alone. Courtesy of eMarketer.com, here’s a look at challenges marketers face with executing a successful strategy to differentiate themselves in the marketplace. 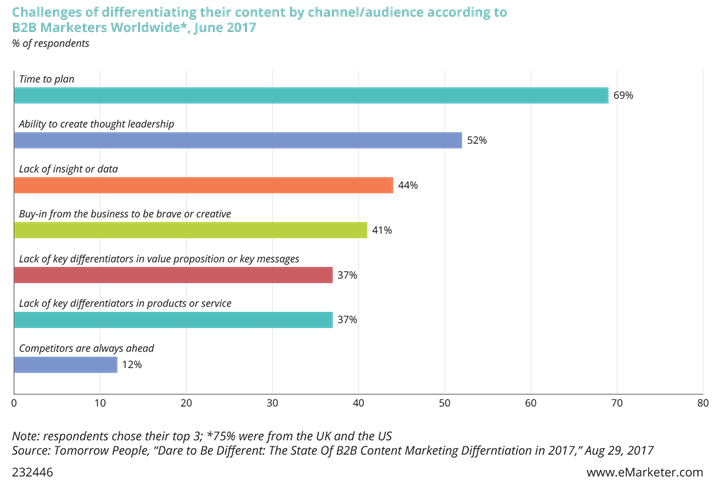 Methodology: Survey results are from 172 B2B marketers worldwide who were contacted between May 25 and June 5, 2017. Respondents identified their roles as CEO (9%), CMO/VP of marketing/marketing director (15%), heads of marketing (16%), marketing manager (35%) and the rest were other. Tomorrow People is an inbound marketing agency.